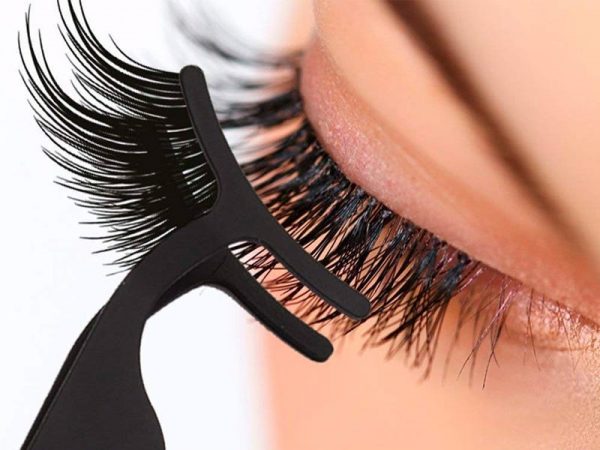 The road to fuller, lusher lashes is quite an easy one nowadays. Falsies of many kinds and styles are available everywhere, from drugstores to high-end retailers. There are a lot of different options in regards to their make, from human hair and silk to mink and artificial materials. Everybody has a preference when it comes to the make of the lashes they want to use so it’s great that so many versions exist.

For quite some time, faux lashes had only one way of being applied and that was glue. Simple enough, you apply some lash glue onto the falsies and then position them on your eye until they stick nice and perfect. However, with the advancements of technology and people’s desire for novelty, a new way has surfaced a few years ago. I’m talking about magnetic lashes. Instead of glue, magnetic lashes require a special eyeliner to be applied to which the lashes are drawn and kept in place.

These are the two main methods of applying falsies nowadays and both of them have their distinct pros and cons. You can buy both glue-on and magnetic lash extension kits online, so purchasing them is easy enough. Let’s take a look at the intricacies of the two.

Using glue to put on your false lashes is a method that has been around for many, many years. If you look at the history of makeup and the yearning for fuller lashes, you’ll end up as far back as Roman times. Back then, women used to glue human hair strands to their eyes to create that full lash look we still want today.

However, times have changed, and although the method is still the same, the safety of it has improved greatly. Lash glue isn’t anything close to regular glue. In fact, it’s more of a glue-like substance than actual glue. Made with certain chemical compounds that allow it to be fast-drying and strong, but still able to be removed with a certain amount of ease, eyelash glue is a very interesting invention indeed.

There are a few advantages of using eyelash kits that require glue.

First thing’s first, glue-on falsies tend to sit closer to your actual lash line, making it very easy to blend in with your natural lashes and give you a unified look. They are also pretty prone to staying put, meaning they won’t cause any trouble in different kinds of weather. Once you position your lashes as you’d like them to be, they’re going to stay there until you remove them.

Another great thing about adhesive falsies is that they can be easily shaped to match your eye, once again, giving you a unified look. They also tend to feel sturdier and pretty comfortable as they’re glued on your eyelid.

The adhesive you use will make the most difference in your experience with glue-on lashes. If you get a cheap adhesive you can expect bad things to happen, although this isn’t always true. You don’t need to spend hundreds of dollars on lash glue, you just need to pay attention to the brand and the way the adhesive is made. You also need to mind where you put the adhesive and how much of it you apply. Keep in mind that you really don’t want that glue in your eye, so look for tutorials and practice a lot before you take your falsies for a night out!

Unlike lash kits that need adhesive, magnetic lashes use only the power of attraction to stay in place! Usually used alongside a magnetic eyeliner, these lash bands are lined with little magnets, and when brought close to the eye they snap snuggly onto the liner.

Easy enough to imagine, though, for some, not as easy to do. Magnetic lashes, not unlike glue-on falsies really, tend to need a bit of practice. Exactly because of the absence of glue, it is a bit harder to master the technique of putting them on, but it’s really nothing anyone can’t do.

Magnetic lashes are known to be way more mess-free than their adhesive counterparts as there is no need to apply anything to the lash itself, only a coat of liner on the eye. However, this might mean that the lashes won’t sit as close to the lash line as glue-on lashes would. It all depends on your ability to apply the liner though, so again, practice!

Since there is no glue involved, magnetic lashes tend to be more hygienic and easier to maintain and reuse. Glue is known to leave residue behind, but the gel liners used with magnetic eyelash kits don’t. Furthermore, it’s easier to take off magnetic lashes, but this can also mean that they might snap off by themselves in certain weather conditions.

Once again, it’s the quality of the lashes and the magnetic compound that makes all the difference. If you buy well-made magnetic lashes accompanied by a well-made magnetic liner, you won’t have any issues once you’ve mastered the technique. Otherwise, get ready for some hiccups!

Magnetic lashes are a favourite of people with sensitive skin that really want to avoid putting any heavy chemicals around their eyes and risk irritations. However, as I said before, if you buy smart and pay attention to the product’s make and manufacturer, you won’t have any issues.

Magnetic or glue-on, it doesn’t matter! They’re both excellent ways to gain fuller lashes for a while and do so comfortably.

Both methods work great, but they both need a bit of practice. Both require maintenance and cleanliness to avoid any unwanted situations around the eye area, such as irritations or damage. No matter which method you choose, always make sure you’re buying a quality pair of lashes and a quality adhesive/liner. You know your skin and your needs best, so it’s really up to you.

Faux lashes do great by themselves for a fresh, natural look, or paired with a strong lip and an overall glam look for a fancy night out! Whichever way you choose to use them, I hope this article shone a bit of light on the differences between the two most common ways of using lash extension kits and you now feel more confident and comfortable in your decision!